This was the inaugural performance by the Inverurie Concert Band in their new venue and was the fifth Christmas Concert since their formation. A total of 38 musicians led by Musical Director Hamish Wood entertained the audience to a selection of tunes with a big sprinkling of festive cheer.

The programme got under way with the lively Palladio by Karl Jenkins. The exciting two bar motifs got the baroque sounding piece under way which built throughout to an exhilarating finish. This was followed by Disney Fantasy by Naohiro Iwai that strung together a medley of familiar Disney themes starting with the opening melody of ‘The Mickey Mouse Club’ and included themes from ‘Snow White’, ‘The Lion King’, ‘Heigh Ho’ and ‘Whistle While you Work’ among others that had the audience smiling in recognition of the songs.

A Home Alone Christmas by Paul Lavender incorporated themes from both Home Alone movies with a light uplifting feel just right for getting the audience in the holiday mood before Christmas.

Cantique de Jean Racine by Gabriel Faure (arr Musgrave) gave the band an opportunity to display its timbre and overall tone with a beautiful calm melody underpinned by ceaseless triplets.

Back to a Christmas theme next with Fanfare and Hark! The Herald Angels Sing, showing off the seven-piece trumpet section in Renaissance tradition with glorious fanfares followed by a rocked up version of the familiar carol.

The younger members of the audience were invited to come to the front to sign along with Baby Shark – the toddler tune that has taken over the world – although Hamish Wood, the conductor, seemed to know more about it than many of the kids!

Celtic Carol by Robert Smith is an Irish treatment of the song What Child is This which opens with an evocative piccolo melody over a sustained note on the tuba - setting a mysterious atmosphere at the start but then quickly gathers momentum and ends with a frenzied tutti!

The final selection provided the earworm of the concert with an arrangement of the Village People’s Go West by Toru Kanayama. This pop classic was pop at its best - with an infectious groove interlaced with brass and woodwind stabs and crescendo’s and topped off with a fantastic alto solo - all of which left the audience wanting more - but alas, that was it!

All in all, a feelgood experience for all involved – it’s a pity there is still two and a half weeks until Christmas!

Come along to Rare Fayre at Glen Garioch Distillery on Saturday 7th December for a great day out. The band is playing in the afternoon. 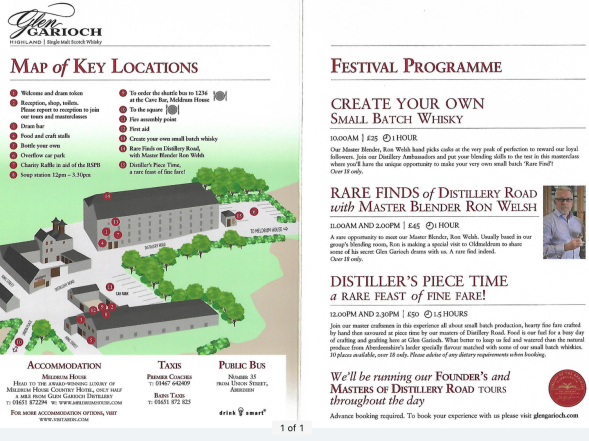 Come along to our annual Christmas Concert.

Sunday 8th December at 2pm at the Thainstone Exchange, Inverurie

Tickets £6/£3 available from band members, at the door and from Eventbrite online - 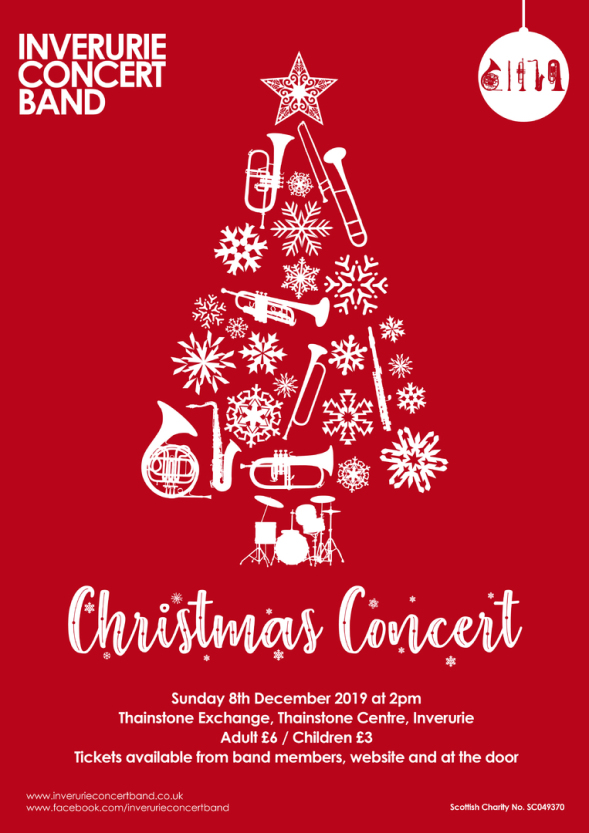 Here are a couple of tunes from our recent summer concert!

We are now a registered charity. Our SCIO number is SC049370.

Summer Concert almost here! Come along and support our 40+ musicians play a selection of great tunes at the Acorn Centre, Inverurie on Saturday 15th June starting at 7.30pm.

Tickets, including a free raffle, cost £5/£3, are available at the door, from the Acorn Centre and from the Little  Music Shop in Inverurie. 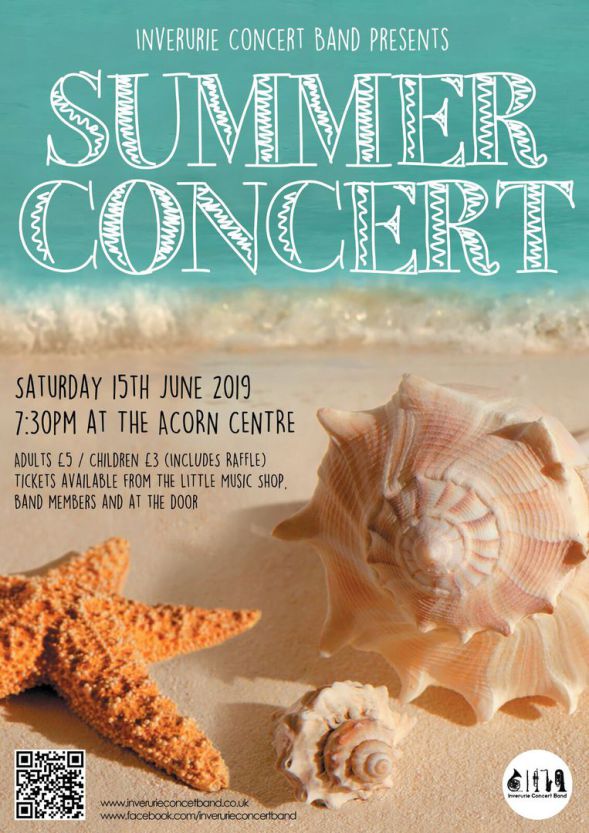 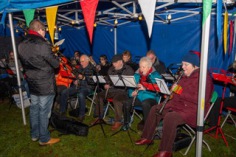 Some of the band playing at the Light up Garioch event at Oyne recently.

Braving sub zero temperatures, the band had a lot of fun playing there despite appearances! 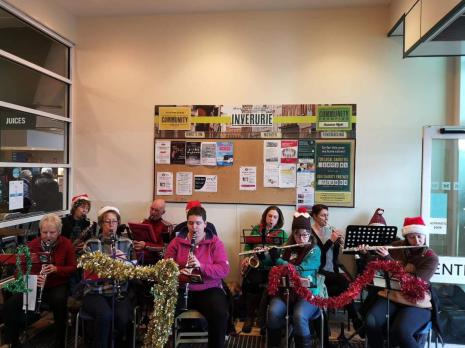 Band members entertained shoppers at Morissons in Inverurie with our assorted carol collection and at the same time raised some funds for the band.

Six members of the band  went  along to bennachie View Care Home and entertained the residents with a selection of carols which went down very well. Hopefully we'll be back next year.

Thanks to everyone who supported us on Satuday 15the December at the Acorn Centre. It was definitely our biggest and best so far!

Tickets £5/£3 from band members, the Acorn Centre, The Little Music Shop and at the door. 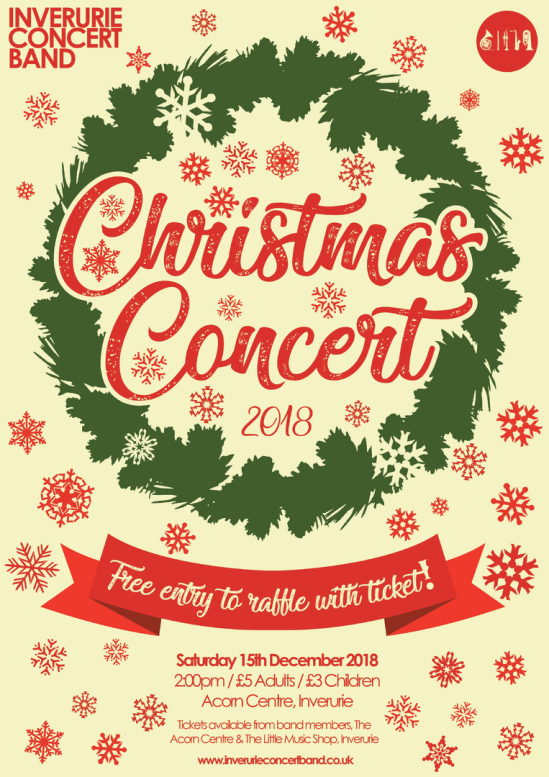 July 2018 - Recordings from part of the 2018 summer concert. For the other tunes, search for Inverurie Concert Band on Youtube.

Summer concert on Saturday 16th June - Windows of the World. 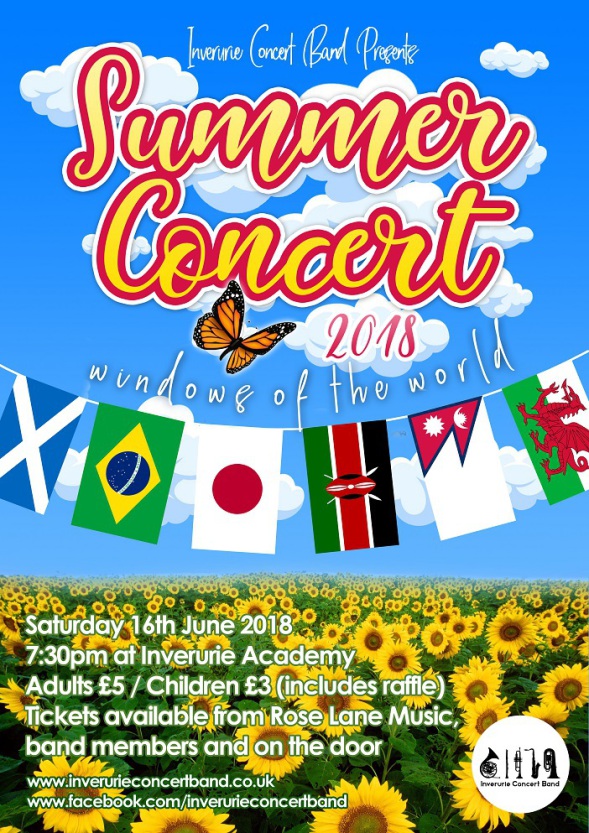 Due to adverse weather conditions, the rehearsal has been cancelled tonight.

The Christmas concert was a great success with lots of positive comments about the event. 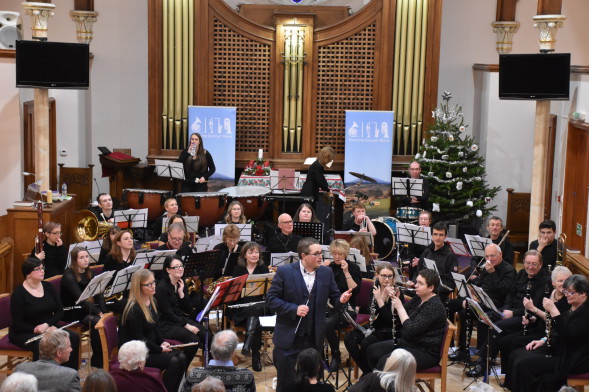 Listen to "A Celtic Christmas" and "Meditation" from the concert!

We are now looking forward to our summer concert in June.

If you are interested in joining the band, please go to the New Members  or to Contact Us sections above.

The band opened the final fundraising concert for the St Andrews Church in Inverurie with a short selection from their forthcoming Christas concert.

A large appreciative audience enjoyed a narrated version of Peter and the Wolf along with the beautiful Cinema Paradiso, finishing with Rudolph the Red Nosed Reindeer!

A selection of band members played at the Christmas LIghts switch on event in Oyne. Despite freezing contitions  the band kept spirits high with a selection of Christmas carols that was much appreciated by the crowd!

Christmas concert! Come along to the Acorn Centre on Satuday the 16th December.

Fantastic programme with a sprinkling of Christmas carols.

Free entry to Christmas hamper prize draw with every ticket.

Tickets from band members, the Acorn Centre and Roselane Music in Inverurie. 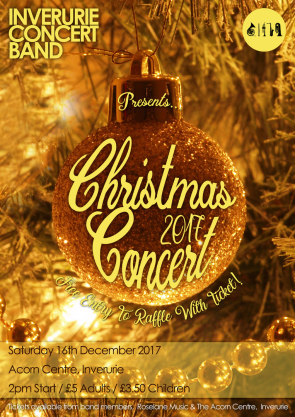 Fundraising success! The band came first in the Tesco Bags of Help fundraising scheme that ran from April until June at Tesco's Inverurie branch - raising £1,650.

A huge thanks to all who contributed.

The band is still to decide the best way to use the money.

We held our summer concert, "Music from around the British Isles"  at the Acorn Centre in Inverurie on Saturday 10th of June. The programme included "Four Scottish Dances" by Malcolm Arnold,  "The Irish Washerwoman" by Leroy Anderson , "An English Sea Song Suite" by Philip Sparke and "Within the Castle Walls" (songs of a Welsh revolution) by Brian Balmages  - amongst others!

A big thank you to all who supported the band by coming along.

The band has continued to grow year on year both in number and musically and come August we will be tackling a brand new programme. 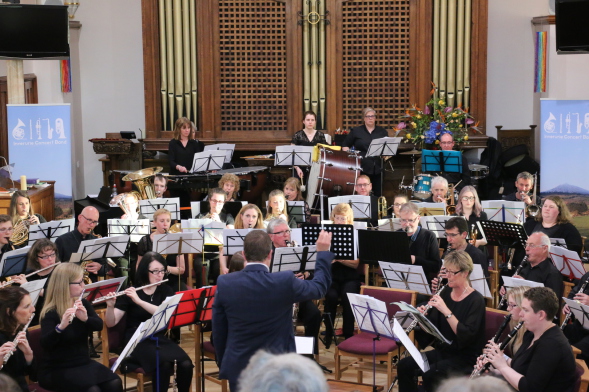 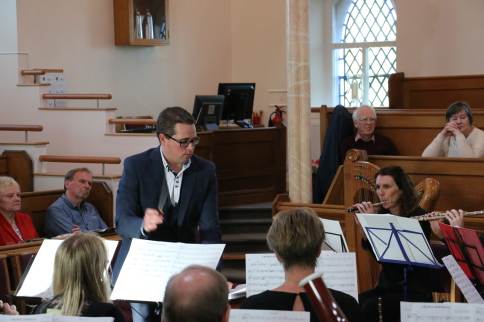 Hamish Wood, our conductor, keeping the band in line. 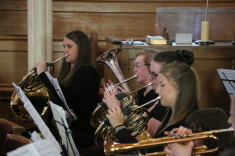 Just a reminder that we are still hoping to raise more money for the band from the Tesco Bags of Help initiative which closes at the end of June.

Every time you shop at the Inverurie Tesco you can request a plastic token and pop it in the container to vote for us.

The band has been fortunate enough to receive a grant from the Acorn Centre Small Grants Scheme.

Vhairi (red jacket) went along to collect the cheque on behalf of the band. 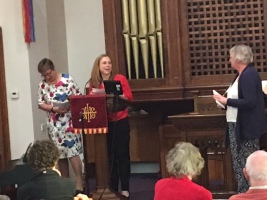 The concert band played at a very soggy Newburgh Gala.

Despite the conditions, the band played on.

"It was great fun " said Isabelle on tenor sax ..."As long as you don't mind the British weather!" 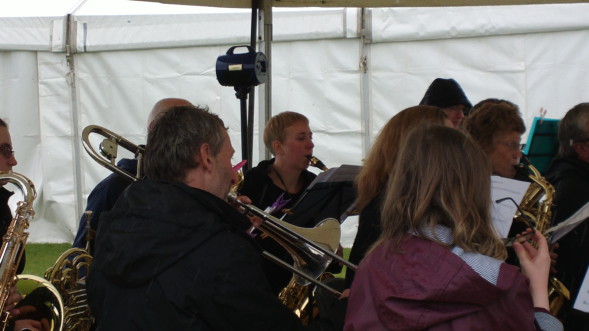 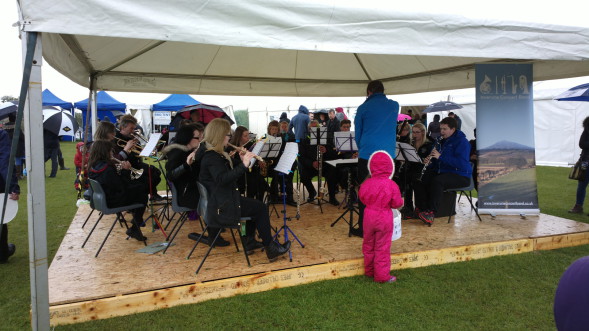 The summer concert is only a few weeks away - come along and support the band! 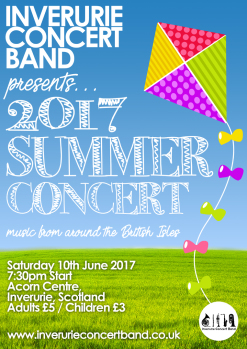 28th April 2017
Help us raise funds for the band! The band is always looking to raise money to buy new music and cover other costs throughout the year.
We are lucky enough to be one of three organisations to be accepted for Inverurie Tesco's Bags of Help initiative for May and June.
Every time you shop you are entitled to a plastic token which is used to vote for the the organisation of your choice.
Shop at Tesco and shop often on behalf of your community concert band!
Thank you

Check out some new pictures in the Photo Gallery of the band rehearsing.

The band is back rehearsing again, this time for the summer concert which is on Saturday 10th June 2017 at the Acorn Centre in Inverurie.. The number of musicians is still rising and we are still on the lookout for new members! For details on how to join, please go to the Contact Us section of the website.

A great afternoon at the Acorn Centre in Inverurie on Saturday 17th 2016 when the band played their Christmas concert to a large enthusiastic audience.

Looking to recruit brass and percussion players now in order to develop the band to bigger and better heights!

Visit our facebook page for the latest photos and audio. 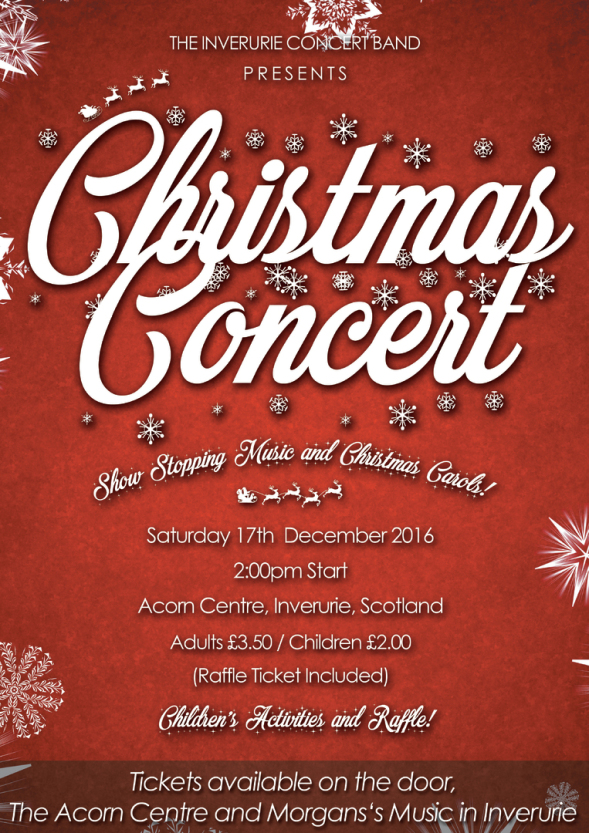 Monday 6th June 2016, Kirsty and Isabelle had the great pleasure of collecting a grant from the Acorn centre on behalf of the Inverurie Wind Band. The funds are gratefully received and will be used to purchase more scores to build up the Wind Band's music library. Much appreciated

It is with huge sadness that we learned that one of our baritone saxophone players Mandy Smith passed away. Here she is pictured with Sonia and Foss from her band Tattie Sax playing at what was to be Mandy's last performance.

Mandy was an accomplished musician and her enthusiasm, encourgement to other members of the band and her wry sharp humour will be missed by all of us. Our thoughts and prayers go with her family at this time.

Fantastic grant received with thanks from The Garioch Partnership. This grant is earmarked to purchase scores for the band. Thanks to Anne for joining us last night and making our rehearsal a bit special! :) 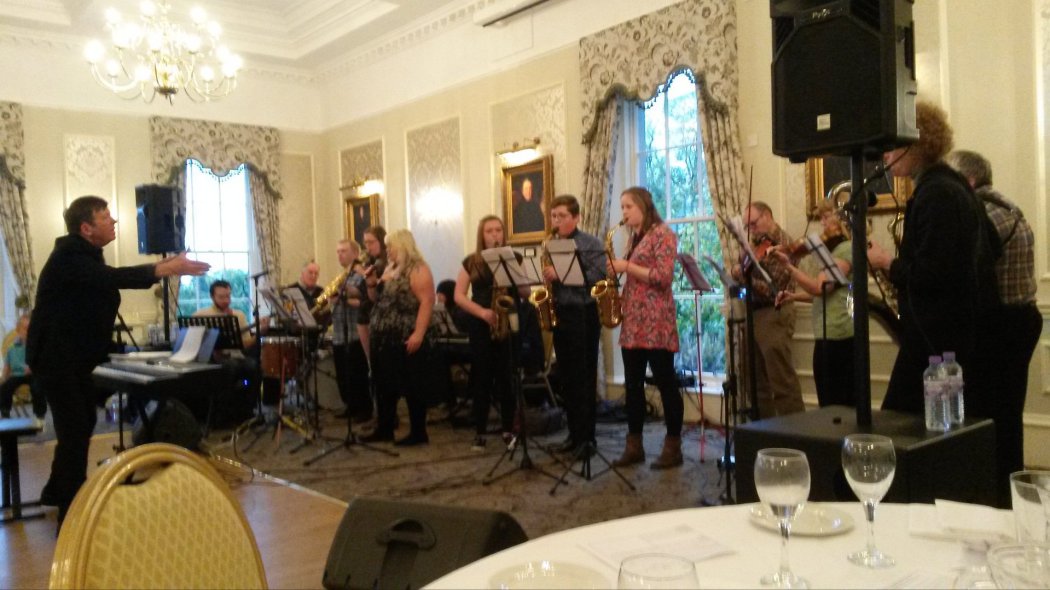 Pauline and Benjamin in the front row, Foss and Bruce hiding behind the speaker! Members of the Inveruriew Wind Band supporting a venture by the Inverurie Jazz Club abd Creative Scotland to perform the maiden performance of the Doric Suite by Richard Michael last Sunday at the Thainstone House Hotel. 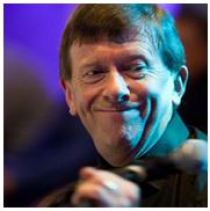 Richard Michael, internationally celebrated musician, has been commissioned by the Inverurie Jazz Festival to compose a piece of music then rehearse, perform and record it. He is inviting musicians from Inverurie Wind Band, Inverurie Academy and the Aberdeenshire Saxophone Orchestra to be a part of this exciting project.

Richard Michael has received the BEM for services to music education. He is an Honorary Professor of Jazz Piano at St Andrews University and regular presenter on BBC Radio Scotland’s Jazzhouse 92-95 FM. He is also one of four musicians who deliver the Aberdeenshire Jazz Programme to Primary Schools in Aberdeenshire as well as being a performer and prolific composer.

The Doric Suite is a new suite of music by Richard Michael, commissioned by the Inverurie Jazz Festival with a first performance set for Sunday 25th October 2015 at 3.30 pm in the Thainstone House Hotel.

Paulina, Bruce, Ben and Foss are representing the Wind Band.

Please come along and support us!

Here is a message from Suzanne. please read and spread the word:

As you know, my dad died 14 weeks ago due to dementia. So, I have decided to commit to a 100K challenge to raise money for Alzheimer's research UK in his memory. I am not very fit so it will certainly be a big challenge for me!!! I'd really appreciate it if you could share my link with everyone in the band via email and also on the Facebook page and anyone else you see fit as every pound counts.

Our chairperson Suzanne Low and Librarian Mary Burch attended a presentation on 6th October where the Garioch Charities Shop presented the band with a cheque for £500 to support the purchase of scores for the 2015 seasoin.

It's important that the band builds a library of our own scores over time. These scores can be quite expensive, costing anything from £50 through to £250 and beyond!

We are very grateful for this donation and ask you to support Garioch Charities Shop and all the good work that they do.